Environmentalists Around the World

This Curiosity of the Month focuses on global citizens who are making the world a better place – one tree, coral branch, or drop of clean water at a time.

Please see our affiliate disclaimer at the end of this blog.

Activist: A person who uses or supports strong actions (such as public protests) to help make changes in politics or society.

Advocacy: The act or process of supporting a cause or proposal.

Conserving: To keep something safe from being damaged or destroyed.

Coral reef: A long line of coral (a hard material formed on the bottom of the sea by the skeletons of small creatures) that lies in warm, shallow water.

Environmentalist: A person who works to protect the natural world from pollution and other threats.

Global Warming: The recent increase in the world’s temperature that is believed to be caused by the increase of certain gases (such as carbon dioxide) in the atmosphere.

Legislation: A law or set of laws made by a government.

Pesticide: A chemical that is used to kill animals or insects that damage plants or crops.

Reforestation: The act of planting tree seeds or young trees in an area where there used to be a forest.

Sustainable: Methods that do not completely use up or destroy natural resources.

Good people are doing good things all around the world. This year to celebrate Earth Day, we here at Big Shared World want to share with you several environmentalists who are making this planet a better, healthier, more sustainable place to live.

Before we jump straight into the action, we want to give you a quick history lesson. Earth Day was officially started in 1970 by Wisconsin Senator Gaylord Nelson as a way to teach people about the dangers of pollution. His efforts started with students at the university level and have since spread to people of all ages and levels of education. The holiday has made a significant impact on the opinions of American citizens and has resulted in many positive actions including several pieces of legislation to protect the environment. Now people all over the world celebrate Earth Day by participating in parades and rallies, cleaning up litter in their neighborhood, walking or biking to school and work, planting a tree or committing to reusable water bottles instead of disposable options.

Below you will find a list of  great books featuring rockstar environmentalists from around the world. Learning about what others are doing to protect and improve the environment is one way to teach ourselves what needs to be done and what we can do to help. 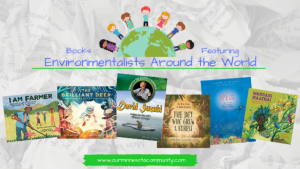 So buckle up and get ready to travel around the world on this environmental reading tour.

Farmer Tanoh has been planting crops and providing clean water to people in his country of Cameroon for the past twenty years. 800 gardens and clean water for tens of thousands of people are in existence because of his hard work.  Introduce yourself to  Farmer Tanoh in this video and then learn more about him in this book, by Miranda and Baptiste Paul.

Next, we’ll travel to the United States to meet Rachel Carson.

If Senator Nelson got the party earth party started, Rachel Carson kept it going. A lover of nature since she was a child, Rachel devoted her life to conserving our planet. One of her greatest achievements was publishing a book titled, Silent Spring. In this book, Rachel informed the world on the dangers of using pesticides. Her work has encouraged and motivated people to wake up, pay attention and get involved in environmental issues. In the Environmental Crusader Superheroes series, Rachel’s book is a must read because we learn about this influential person and also about what must be done (and not done) for our planet to thrive.

Let’s stay in the US, and head over to Florida!

Ken Nedimyer is a longtime resident of the Florida Keys, and had seen, first-hand, the decline of the local reefs through the decades. One day, he decided to do something about it. For the past twelve years, he has been working to rebuild the coral reefs, one branch at a time. In 2012 Kenwas named one of CNN’s Heroes: Everyday People Changing the World. Learn more about Ken and his work in Kate Messner’s beautiful picture book titled: The Brilliant Deep.

She first fell in love with the ocean when she saw the Gulf of Mexico as a child. As an adult she has made it her job to be connected to it in every possible way. Whether she is underwater, on land, in a lab, on a research ship or teaching others about what she has learned, her life is about the ocean. The book, Life in the Ocean “tells the story of Sylvia’s growing passion and how her ocean exploration and advocacy have made her known around the world” (Macmillan). This picture book biography also includes a letter from Sylvia herself encouraging young environmentalists.

As a boy Jadav Payeng saw a problem. There was no shade in which to sit when he needed a break on his daily four mile, round trip (by foot) commute. It was so hot that even the animals began to die without a cool place to rest. In 1979 he started planting trees near India’s Brahmaputra River. “What began as a small thicket of bamboo, grew over the years into 1,300 acre forest filled with native plants and animals. The book The Boy Who Grew a Forest, tells the inspiring true story of Payeng–and reminds us all of the difference a single person with a big idea can make” (Sleeping Bear Press).

Shall we go to Canada now?

David Suzuki is an environmental activist. This means it is his job to take care of the planet and strongly encourage others to do the same. To spread his message he has made TV shows and spoken with political leaders to be a part of the solution to help the environment. David is especially concerned about global warming. Watch this video to better understand his mission and how you can be involved. Then, read more about David and his efforts in the book, David Suzuki: Doing Battle with Climate Change.

We will end where we started, back in Africa!

Wangari Maathai worked both for peace and for the environment! She received the Nobel Peace Prize in 2004 for helping women stand for their rights through reforestation projects. In the course of thirty years, Wangari and people in her organization planted over thirty million trees! To learn more about her incredible efforts, read the beautiful picture book, The Woman Who Planted Millions of Trees.

To learn about kids who are changing the world for the better, check out this book!

Both kids and adults from the United States, Mexico and Canada are featured in this book about people doing great things for the environment.

To read about the work of event more environmentalists in American history and find directions to projects YOU can complete, read this book.

Before you go, can we share a few more cool facts about Earth Day with you?

How will you celebrate Earth Day this year? With learning? With volunteering? With recycling or planting or cleaning? However you choose to spend Earth Day, we thank you for stopping by our blog today and also for your efforts!

Affiliate marketing is promoting a product or service in return for a commission. When you purchase a product or service through one of our links, we earn a small part of the sale. There is NEVER any extra cost to you. If you looked up the same product on the same site through another source besides our website, the price will still be exactly the same. 100% of the time.

We also NEVER link to products or services that we don’t 100% believe in. We will never tout a company or their goods if they are disreputable or if we don’t believe them to be worthy of your hard-earned money. In no way are our affiliate links a scam. (Language borrowed with permission from Kristen Kieffer on Well-Storied.com)

Gestures of Welcome from Around the World
Scroll to top