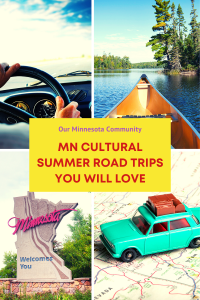 Minnesota is famously called the “Land of 10,000 lakes”, but did you know that it also has a rich cultural history right here in our own backyard? Explore summer road trips that allow you to discover Minnesota culture.

If you live in Minnesota, you probably have your favorite lake destination, whether it’s Lake Harriet in the city, Lake Superior on the North Shore, or Leech Lake farther inland. Minnesota is also home to various bike-friendly hiking cities, such as Lanesboro, Oprah Magazine’s pick for Small American Towns you Should Visit ASAP.

While lakes and trails are good places to social distance in these days of COVID-19, there are still plenty of Minnesota destinations that also include a learning component. These destinations are rich in both history and culture, and would be great places to visit with your children.

Below are 5 examples of Minnesota cities you can explore on your next cultural summer road trip.

The state of Minnesota sits on Dakota land. Even though most of the history books written about the early 19th century focus on European explorers and fur traders, the majority of people living in the area that is now known as Minnesota were Ojibwe and Dakota people. Oral history and archaeological artifacts show that native communities have been living on the land since 6,000 B.C. Minnesota scholars and traditional Ojibwe accounts place Ojibwe tribes in the state during the late 1600’s with remnants of their early life seen in burial mounds as well as pieces of
pottery and metalwork found by archaeologists (excerpt from Educator Guide).

There are seven Anishinaabe reservations and four Dakota communities. Here, powwows or wacipi, which translates to “they dance” in the Dakota language, are a time for reunions and traditional music, dance, and clothing. These lively events, which take place largely in summer, are open to the public and offer travelers a chance to engage authentic local culture.

Due to COVID-19, most powwows have been canceled. However, you can check local updates for these powwows scheduled in August and September on Minnesota Monthly.

There’s also been a movement to preserve Native American languages, such as Ojibwa, through bilingual signs, which have become more commonplace on roadways. At the convention center in Bemidji, for example (a gateway to the Red Lake, White Earth, and Leech Lake reservations) the doors read “welcome” and “boozhoo.”

Did you know the concept of “Minnesota Nice” has been attributed to Minnesota’s Scandinavian influence? An article expanding on the concept states, “Anyone who has lived in Scandinavia, as McKnight did for years, knows that “it’s somewhat hard to get an ‘in’ there,” he said. But once the friendship is established, “all barriers to communication break down and there results a torrent of friendship, expressions of sincerity, and even personal confidences.”

Today the American Swedish Institute in Minneapolis, has a mission to serve as “a gathering place for all people to share experiences around themes of culture, migration, the environment and the arts, informed by enduring links to Sweden.” It was started in 1981 and has thousands of ASI members, and interested community members, from all heritage backgrounds who come to the castle-like building for events, classes, food, and cultural happenings.

Get a sense of the state’s Scandinavian heritage at the Gammelgården Museum (which means “old farm” in Swedish) in the small city of Scandia, about 45 minutes north of Minneapolis. The seasonal, open-air museum features five historic log buildings and artifacts.

Alexandria is also home to Big Ole, a 28-foot Viking statue constructed in 1965 for the New York World’s Fair.

A group of German immigrants founded the city of New Ulm in 1857. New Ulm has a rich Minnesotan history. The town, started by German immigrants, grew in size when steamboats passed it on their way to Fort Ridgely, which is located in Nicollet County. When New Ulm resident, John Lind, was elected the 14th Governor of Minnesota in 1898 (Lind served from January 2, 1899, to January 7, 1901), attention was brought to the town, resulting in further recognition and growth.

Did you know that you can meet Hermann the German in New Ulm, which was voted #1 on the “Best Midwest Weekend Trips” by travel blogger Katy Flint?

New Ulm is also the hometown of Our Minnesota Community interviewee, George Glotzbach! Hear his thoughts on growing up in New Ulm in this video:

Some socially distanced activities to do in New Ulm are:

This is just the beginning of a grand adventure when it comes to exploring Minnesota cultures! To expand your learning, check out Our Minnesota Community activity book, which features up to 13 different cultural profiles as seen through the experiences of Minnesotans.

Or, you can browse the upcoming educator guide, which is a great resource for educators and home-schoolers, and includes lesson plans, vocabulary words, videos, extension activities.

Now, it’s your turn! Which cities in Minnesota have you visited this summer?

To make it easier, download a free copy of The Minnesota Cities map by clicking the product image below. 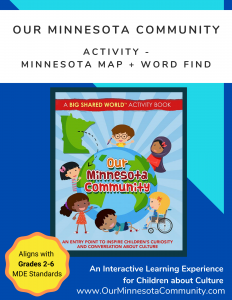 The map is an activity pulled directly from Our Minnesota Community activity book, and allows you and the children in your life to identify some of the rich, cultural traditions in our own state.

Want to join the discussion?
Feel free to contribute! 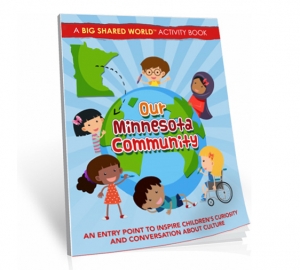