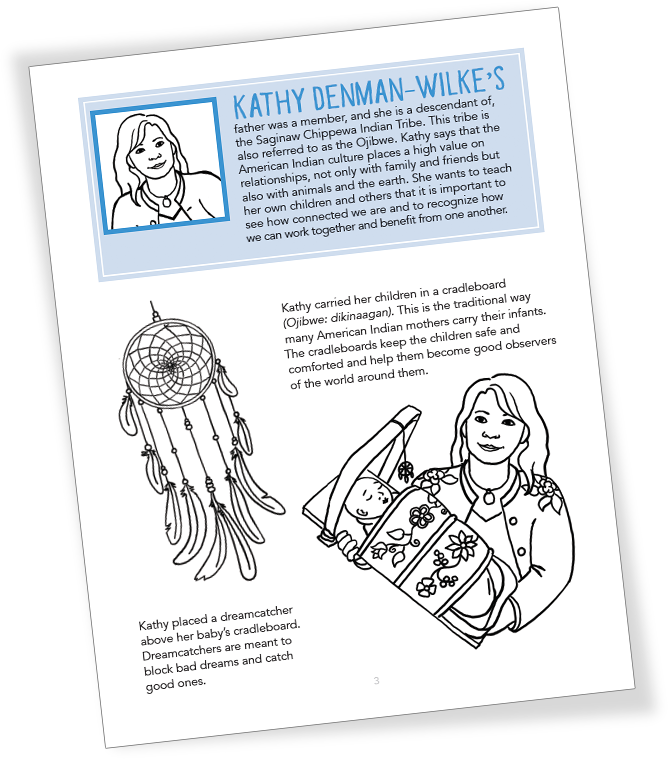 Kathy Denman-Wilke’s father was a member, and she is a descendent of the Saginaw Chippewa Indian Tribe, also known as the Ojibwe. She says that her preferred cultural identifier is American Indian, but that each person has their own preference, so it is respectful to ask an individual what title they would like you to use.

Even though most of the history books written about the early 19th century focus on explorers and fur traders, the majority of people living in Minnesota at that time were American Indians. Minnesota scholars and traditional Ojibwe accounts place tribes in the state during the late 1600’s, but some believe they have been living here since 6,000 B.C. Remnants of their early life can be seen in burial mounds and pieces of pottery and metalwork found by archaeologists. The Ojibwe tribe was able to flourish in this area during those times based on their extensive knowledge of the natural world including plant life, animal habitats and some agricultural practices.

When European settlers came to Minnesota in the 1700’s and 1800’s the Ojibwe had the majority of their territorial land taken from them through treaties, that were not upheld. “By the mid-1860’s much of the once vast domain of this tribe had been transferred to the United States government.” At this time the tribe was forced to live on reservations which negatively impacted their lives and lifestyles in many ways, including loss of cultural traditions and population decline. There are seven Ojibwe reservations in Minnesota including: Grand Portage, Bois Forte, Red Lake, White Earth, Leech Lake, Fond du Lac, and Mille Lacs. “All seven reservations in Minnesota were originally established by treaty and are considered separate and distinct nations by the United States government. (Indian Affairs Council Website)

According to a 2013 study and report conducted by the Minnesota Chippewa Tribe and Wilder Research, there are currently 41,000 members of the Chippewas tribe living in Minnesota. The total number of “American Indians in Minnesota number 60,916, or 1.1 percent of Minnesota’s total population.”

American Indian
A member of any of the indigenous peoples of the western hemisphere, especially the United States. (p. 3)

Aspiration
Something that a person wants very much to achieve. (p. 4)

Cradleboard
A wooden frame worn on the back, used by North American Indian women for
carrying an infant. (p. 3)

Dream Catcher
A small hoop containing a horsehair mesh, or a similar construction of string or yarn, decorated with feathers and beads, believed to give its owner good dreams. Dreamcatchers were originally made by American Indians. (p.3)

Reservation
A segment of land that belongs to one or more groups of American Indians. It is land that was retained by American Indian tribes after ceding large portions of the original homelands to the United States through treaty agreements.

(Estimated Activity Duration: 25 minutes, a bit longer if you chose the collage option.)

Discuss as a group:

Why do American Indian mothers carry their babies in cradleboards?

Possible Answer: Kathy shared that American Indian mothers carried their babies in cradleboards so that they could be close to their child throughout the day, and also so that the infants could start to learn about their world through the things they saw.

Why might a baby feel safe and loved while in a cradleboard?

Possible Answer: A baby might feel safe in a cradleboard because they are securely swaddled, which is a comforting feeling to babies.

How does a cradleboard allow a baby to view the world around them? (If a baby was carried into this classroom on a cradleboard. What might they see and observe?)

Possible Answer: (Expand to include first part.) In this classroom, the baby would see children learning, reading and talking. The baby would see tables/desks and chairs, student art work and our class pet.

How do you see families carry their infants?

Possible Answer: I see babies carried in car seats, strollers, and front and back carriers.

Minnesota Chippewa Indians – This website is managed by the American Indian Heritage Foundation. The group was established in 1973 “to provide relief services to Indian people nationwide, to build bridges of understanding and friendship between Indian and non-Indian people.” The website has resources including books, articles and resource directories.

Native American Cradleboards – This site explains the history and purpose of cradleboards as used by American Indians. There is even a craft listed at the end of the site, teaching you how to make your own mini cradleboard!